Thrombophilia is a common blood clotting problem that can have life-threatening consequences. 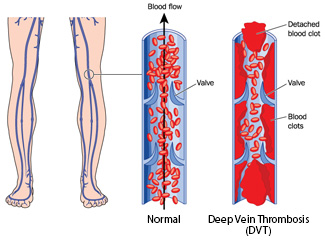 Find out if you are at risk - get tested

Thrombophilia is a condition where the blood has an increased tendency to form clots. A blood clot within a vein is known as venous thrombus and the most common form is deep vein thrombosis, which is a blood clot in the deep veins of the leg. If this blood clot breaks loose and travels to the lungs, it is known as pulmonary embolus and can be very dangerous. A less common (and more severe) form of venous thrombus is known as cerebral venous sinus thrombosis, where a blood clot forms in the dural venous sinuses, which drain blood from the brain.

What are the Risk Factors for Thrombophilia?

Abnormal blood clotting can occur in anyone but there are certain things that increase the chance of this potentially fatal problem. The more risk factors that an individual has, the higher the chance of a blood clot. Some risk factors cannot be changed and these include age-related risk, ethnic background and genetic risk factors.

The risk of blood clotting for children under 15 years is less than 1 in 20,000, but those in their fifties have a 1 in 760 to 1600 chance of a blood clot. Elderly people (over 80 years of age) have an even higher risk, with about 1 in 170 to 220 suffering from a blood clot. Some ethnicities have an increased risk of thrombophilia compared to others. African Americans have the highest risk, followed by Caucasians and Hispanics. Asians and Pacific Islanders have a much lower risk but blood clots can still occur.

There are several health, environmental and lifestyle risk factors that also contribute to thrombophilia, including surgery, injury, infections and inflammatory disease. Each of these increases the chance of blood clots to varying degrees and the associated trauma and immobility play a role in the chance of thrombophilia. Diabetes, cancer and cancer treatments can also increase the risk of thrombophilia. Some risk factors, such as a sedentary lifestyle, obesity and smoking can be reduced by lifestyle changes.

Hormone changes from contraceptive pills and hormone replacement therapies or during pregnancy can all increase the risk of thrombophilia to varying degrees. Contraceptive pills and hormone replacement therapy (to relieve menopause symptoms) increase the risk of abnormal blood clots by 2- to 4-fold and, if combined with one or more of the genetic mutations described above, the risk can be up to 100 times higher compared to someone without the same risk factors.

Next, Signs and Symptoms of Thrombosis »